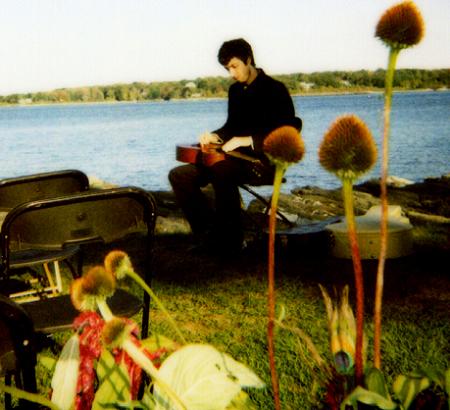 Micah Blue Smaldone’s newest album, The Ring of the Rise, begins at dawn the day after his austere 2008 album, The Red River. Written and recorded in a remote corner of Northern Maine, these songs knell with excitement watching new beginnings in the world from a frozen outpost. The album features much full band accompaniment, exploring sonic reaches of early 70’s era Neil Young, or Richard and Linda Thompson’s first albums, with electric guitars and homemade tube amplifiers, as well as Micah’s familiar acoustic finger-stylings.

The Ring of the Rise continues Micah’s relentless efforts to mine future truths from the past, this time hauling out a slab of marble spanning the 1950’s through the 1970’s, veined with slapback echoes, plate reverbs, tube equipment, and hefty old American iron. The sounds are both new and familiar, tugging at a collective consciousness particular to our era, where the past clamors for reconciliation with the future.

“Heavy Bottle” opens the album with an appeal to drink and be merry on the eve of revelation; “Time” awaits our maturing into Earth; and “Caroline”, a furious indictment of old American privilege, closes the side. The sparse instrumental “Harbingers” opens side B, ominous of “Dead Stop”, a stream of consciousness tear down the highway towards frantic acts of defiance. “Dog and Siren” calls from a forsaken part of the world, and “Iris” ends the album on a light note, celebrating camaraderie and purpose within music.

Recordings were made throughout 2012, primarily at a rented house in a remote part of Northern Maine.  Micah played all the basic tracks one at a time, then brought the material down to Portland for some accompaniment by Caleb Mulkerin and Collen Kinsella (Big Blood), and sage Tom Kovacevic, all of whom have played together in several incarnations over the last decade. Micah’s brother, Tristan, also made an appearance, playing violin on “Heavy Bottle”.   The Ring of the Rise is Micah’s third album on Immune Recordings, along with 2008’s The Red River and a split LP with Big Blood released in 2012. He has also released three solo albums on North East Indie Records, and was a member of Fire on Fire, who released The Orchard on Young God Records in 2008.